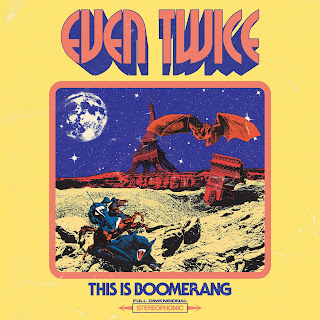 As anyone who has witnessed their pummeling onslaught live knows, this Brooklyn-based fireball of a duo pulls no punches. But the most recent release by Even Twice (vocalist/bassist Robert Hait; vocalist/drummer Pat O’Shea) makes it clear these gentleman are not just your run-of-the-mill loudmongers but also posses a gift for nuance they are none too shy about flaunting.

On the 7-song EP This Is Boomerang, the band’s trademark post-punk/prog is effortlessly blended with elements of psych and catchy melodies, resulting in an interesting hybrid that manages to cover much ground while retaining all the power and focus of the Even Twice experience. It’s also a treat to hear both of these distinct but similarly expressive vocalists exhibit their wares in this context, adding another layer to a sound that, taking into account the sonic limitations inherent in a duo format, could come across quite monochromatic in lesser hands.

[in alphabetical order by artist]

CHRIS CORNELL “Wave Goodbye”
Dedicated to Jeff Buckley, this soulful tune is from Cornell’s debut album ‘Euphoria Morning’ [A&M-1999] and alludes to Buckley's demise with a clever pun as its title.

CPR “Morrison”
Oliver Stone’s 1993 movie about The Doors was the inspiration for the first song David Crosby wrote with his long lost son, keyboardist James Raymond, for the self-titled, debut CPR album, released in 1999. Key lyric: Croz puts aside the poetic imagery of the verses and sings bluntly about Stone's characterization of his friend in the song’s chorus, “I’ve seen that movie / and it wasn’t like that”. Yikes!

PAUL McCARTNEY “Here Today”
The John Lennon tributes are plentiful and include high profile ones by George Harrison and Elton John, but I’m most partial to this heartfelt track from his old writing partner.

THE REPLACEMENTS “Alex Chilton”
It’s the only one from this bunch that was written while its subject was still alive and the lone uptempo rocker here. If not their top song, one of the band’s very best. Oh, and the implied advice to "never travel far / without a little Big Star" is one I have always adhered to.

TEMPLE OF THE DOG “Say Hello 2 Heaven”
Wrapping up this quintet as it began with another song written by Cornell, this time a moving tribute to his old friend and roommate, the late Andrew Wood, frontman for the bands Malfunkshun and Mother Love Bone. In a career full of them, this is arguably, Cornell’s finest recorded vocal. (Btw, Alice in Chains' “Would?” is also about Wood.)


Honorable Mention:
SONIC YOUTH "Teenage Riot"
It's not clear whether it's about an alternate reality where J Mascis is President of the United States (we’ll take it!!!) or president of the alternative dream but, regardless, it's a longtime fave that ALWAYS makes me smile.
Posted by Kiko Jones on 6/01/2019