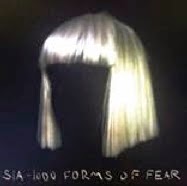 If your recollection of Sia is that of the sultry vocalist who graced Zero 7’s “Destiny”, as well as “Distractions” and “In the Waiting Line” (the latter two featured in the HBO series Six Feet Under and the indie film Garden State, respectively), you might be slightly jolted by her latest album, 1000 Forms of Fear [Monkey Puzzle/RCA], which is more in line with her newer status as a collaborator with the likes of Christina Aguilera, Beyonce and Rhianna.

Sia isn’t content to just write with/for these ladies, it seems, and is swinging for the fences in an attempt to play in their league. Whether she succeeds or not in this particular endeavor is, frankly, not of our concern. (Fwiw, 1000 Forms of Fear comes across as a less crowd-pleasing Katy Perry album.) We just don’t want to see anyone being misled.
Posted by Kiko Jones on 7/09/2014