Sympathy for this Demon 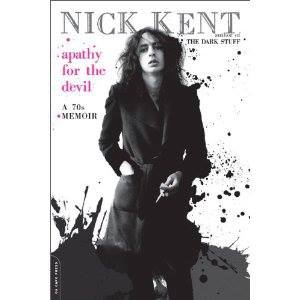 Amidst his recount of crossing paths with the likes of David Bowie, Chrissie Hynde, and Led Zeppelin; his all-too brief stint as a Sex Pistol; his long-standing friendship with Iggy Pop; and a harrowing drug-fueled existence; Kent’s romp thru the ‘70s pushes all the buttons, right and wrong: anger, bitterness, chaos, disgust, empathy, enlightenment, redemption and even salvation—plus a few surprises, as he lists his soundtrack for the decade.

A compelling read that further cements his reputation as part of the rock-crit trifecta—along with Charles Shaar Murray and the late Ian MacDonald—that put the NME on the map.
Posted by Kiko Jones on 12/27/2015

[As always, when attempting this kind of exercise, familiarity and poignancy—as well as considerations of time, space, length, reader interest, etc etc etc—will inevitably lead to some favorites falling by the wayside. But such are the pitfalls of compiling a list of any kind, although slightly less stress is involved when the main criteria is favorites. And so, with that out of the way, and in alphabetical order by film, have at them. Cheers. - KJ]

All Things Must Pass: The Rise and Fall of Tower Records [2015]
Colin Hanks’ documentary deftly pays tribute to the iconic record store chain founded in his hometown of Sacramento, CA. Aces.

Amores Perros [2000]
Three different tales—all involving dogs and love, hence the title—converge at a spectacular Mexico City car crash with dire results for all involved. This film was one of the main culprits behind the international resurgence of Mexican cinema.

Auto Focus [2002]
Greg Kinnear’s winning portrayal of fellow thespian, the late Bob Crane—depicted as a sociopath with an insatiable sexual appetite he needed to visually document for later enjoyment—is a sight to behold.

Best in Show [2000]
Christopher Guest’s crowning achievement is the still biting This is Spinal Tap, but this dog show mockumentary—with a dog owner who literally has two left feet!—is close behind.

Big Star: Nothing Can Hurt Me [2012]
Cult power pop heroes get their long-deserved big screen props in this heartfelt documentary.

Bowling for Columbine [2002]
Sadly, Michael Moore’s record-breaking documentary on gun violence is as timely as ever. Maybe even more so.

Children of Men [2006]
An innovative and profound sci-fi flick; pregnant [no pun intended] with symbolism—it’s a modern-day nativity story of faith and hope amidst the bleakness and despair of a world fraught with infertility, chaos, terrorism, and jingoistic nationalism run amok.


The Dark Knight [2008]
All three films are top-notch, but the middle chapter of the Christopher Nolan Batman trilogy hit especially hard.


Ghost World [2001]
Always reaching top spots in comic book-to-movie polls, director Terry Zwigoff's adaptation of Daniel Clowes' graphic novel is, like its source, a cult classic. It's also the last time its leads, Thora Birch and Scarlett Johansson, were on equal professional footing. (What ever did happen to Birch?)


High Fidelity [2001]
Fans of Nick Hornby’s novel sighed with relief when it was announced fellow music geek John Cusack would bring it to the big screen. Despite shifting the story from England to the US—in this case Cusack’s beloved Chicago—it works beautifully. Hornby thought so, too.

Igby Goes Down [2002]
Burr Steers is best known as the screenwriter for the deplorable Matthew McConaughey-Kate Hudson romcom How to Lose a Guy in 10 Days and for playing Roger (aka “Flock of Seagulls”) in Pulp Fiction. But he wrote and directed this loosely autobiographical comedy drama which is likely the shining gem on his resumé. Stars the excellent Kieran Culkin in the title role.

Mystic River [2003]
Million Dollar Baby [2004]
It’s become a cliché itself that Clint Eastwood’s movies avoid the much maligned Hollywood happy ending. But these two—the former about the ramifications of a long ago sexual child abuse case and its ties to the killing of a current local mob boss’ daughter; the latter a meditation on true family and tough decisions disguised as a boxing film—are nothing but stellar filmmaking.


Ocean's Eleven [2001]
An ensemble cast with no filler, led by Messrs Clooney and Pitt, this is the rare remake that actually improves on the original.

Sideways [2004]
Failed writer and staunch oenophile takes his soon to be married best friend on a final bachelor romp thru California wine country. Hijinks ensue. Actually, Alexander Payne’s buddy flick is so much more than that.

The Simpsons Movie [2007]
No cable, Netflix or YouTube for this one—we actually made our way to the theatre to pay tribute to the first family of Springfield.

61* [2001]
This Billy Crystal-directed account of Mickey Mantle and Roger Maris’ chase for the all-time home run record during the 1961 major league season is our all-time favorite sports movie. Period.


Snatch [2000]
No sophomore slump for writer/director Guy Ritchie, who followed his popular 1998 debut film Lock Stock and Two Smoking Barrels with this smash hit which mines a similar crime/comedy vein. And yeah, even after repeated viewings Brad Pitt is still unintelligible.

Thank You for Smoking [2006]
A clever and humorous satire that zings both sides of the cigarette fence.