A Case of Joni

For all their snark and hipster than thou bullshit--which ultimately only serves to encourage their sheep-like following to erroneously believe they are both "in the know" and somehow above the contempt of the writers and editors--the folks at the dreaded Pitchfork have a surprisingly knowledgeable and nuanced grasp on the classic rock thingie, as evidenced by their reviews of The Beatles remasters and overview of the Yes catalog. 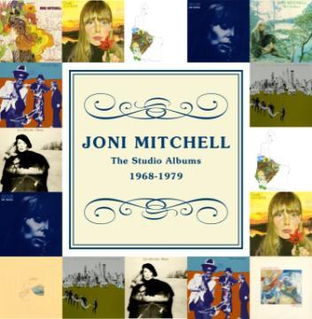 The batting average continues to rise in this regard with their take on the Joni Mitchell no-frills box set, The Studio Years, 1969-1979 [Rhino-2012], which does little more than compile the particular 10-album, 11 year output of this seminal singer/songwriter, a period considered "a striking reminder [of how] no single artist has had a run like" Mitchell. But whatever the box set may lack in terms of extras--a bold move in these days of ever-dwindling record sales--the Pitchfork overview makes up for with valuable insight on "an innovator of singular talent, whose influence was vast, immediate and long lasting". Indeed.
Posted by Kiko Jones on 11/23/2012

Aside from the fact that many albums never made it into the digital age, the jump from vinyl to CDs as the music industry's main format also meant truncated versions of certain records as well.
Case in point: Side 4 of Genesis' self-explanatory Three Sides Live [Atlantic-1982] includes 5 studio tracks, two of which, "Paperlate" and "You Might Recall", were dual A-sides on the UK EP 3 x 3 [Charisma-1982]. The former became a hit single, but "You Might Recall" only got minor exposure and was more or less banished to obscurity when Three Sides Live was released on CD with the studio tracks excised. However, "You Might Recall"--which was originally slated for Abacab [Atlantic-1981] and is now available on the Genesis 1976-1982 [Atlantic-2007] or Genesis 1976-1992 [Atlantic-2000] box sets--is the more interesting of the two and is practically--at this point anyway--a long, lost Genesis single. It's also proof that Phil Collins' pop leanings within the band weren't always a bad thing.

From the Vaults: Ironhorse

Because his voice is so distinctive and this is yet another 2-guitar/bass/drums combo, it's hard not to label singer/guitarist Randy Bachman's late '70s band Ironhorse as a less successful Bachman Turner Overdrive, with whom he'd just parted ways with at the time. Actually, significantly less successful is more like it: the short-lived Ironhorse released a self-titled album in 1979, which includes the minor US hit "Sweet Lui-Louise" [below], and a 1980 followup, Everything is Grey [both albums on Scotti Bros Records] that got little to no airplay outside of their native Canada. BTO reunited in 1983 and with the exception of a 4-year hiatus starting in 2005, have been going strong ever since.

So, why cover a tune when you can pay tribute to the whole album, right? Oklahoma's fearless freaks tackled Pink Floyd's classic Dark Side of the Moon [Harvest-1973] three years ago on The Flaming Lips and Stardeath and White Dwarfs with Henry Rollins and Peaches Doing The Dark Side of the Moon [Warner Bros-2009]; now it's King Crimson's turn.

Playing Hide and Seek with the Ghosts of Dawn is a Flaming Lips song-by-song cover of In the Court of the Crimson King [Atlantic-1969] and is now streaming here. No word on when it'll be available for sale.

It must be nice to be practically unassailable, huh? Almost any other indie-identified artist would be chastised for attempting this sort of rapprochement to classic rock. The Lips have now gone down this road twice. Hmm...
Posted by Kiko Jones on 11/14/2012

Don't Chase After This One 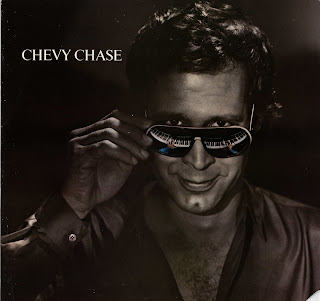 A flop which soon went out of print, Chevy Chase's self-titled musical comedy album [Arista-1980] is probably what you think it would be: a slickly-produced, self-indulgent mess, indeed, but one that must be heard at least once.

Is he singing "Let it Be" in a chipmunk voice? Does he list numerous celebrities of limited physical stature in his parody of Randy Newman's "Short People"? Does the album actually close out with with Chase's take on "Rapper's Delight", called "Rapper's Plight"?

Click here and find out for yourself. You'll be quite glad he's Chevy Case and you're not.
Posted by Kiko Jones on 11/12/2012 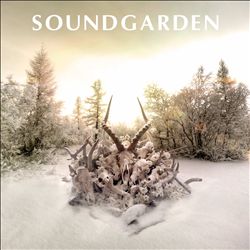 It's been 16 years since their last studio album of new material--during which vocalist Chris Cornell led a mixed bag solo career along with membership in Audioslave--and at first it seemed like a big fail for Soundgarden was just around the corner: that Iron Man song, "Live to Rise", didn't do much to get fans truly excited for the studio comeback, combining a sub par tune in the latter-day solo Cornell vain with some admittedly classic Kim Thayil riffage. Then they decided to kick off the unfortunately titled King Animal with "Been Away for Too Long", instead of choosing a more apt song than a "My Wave" retread--which still rocks, btw--to address that particular point. However, upon further inspecttion, the Seattle quartet have put together an album which won't tarnish their legacy but won't really add to it, either. And if that sounds like damning with faint praise, my apologies; King Animal is actually better than that.

But here's the thing: while this album shares a similarly crisp production with Down on the Upside [A&M-1996] and at different times can remind one of Badmotorfinger [A&M-1991] and Superunknown [A&M-1994], it lacks the majesty of the latter and the visceral power of any of them, and often comes across as a heavier Cornell solo album ("Bones of Birds", "Worse Dreams"). Fortunately, it also lacks any embarrassing moments. And incongruous chocolate-bar-stuck-in-the-peanut-butter tunes as had occasionally popped up on Audioslave albums are not much of a concern here, thankfully. (Although there are a couple of tunes reminiscent of Queens of the Stone Age--"Attrition"--and Blind Melon--"Black Saturday"--respectively, neither one of which amounts to more than filler. And at least one tune--"Halfway There"--may have been an actual outtake from a Cornell solo album. (Probably not Euphoria Morning [A&M-1999], tho.) Oh, and Cornell's upper register is shot. These days he needs a fire engine ladder to reach the high notes he once effortlessly captivated millions of fans with. But that's been going on for a decade now, so...

Ultimately, the best thing one could say about King Animal is that it sounds like it could've been seamlessly released 2-3 years after Down on the Upside and broken up the band anyway. It's a grower and it doesn't suck.

If you were expecting some sort of 20th anniversary commemoration for their first major label release, the seminal Rollins Band album, The End of Silence [Imago-1992], sorry. As it turns out, the band's namesake has no intention of resuming his music making endeavors.

I must say that I miss it every day. I just don't know honestly what I could do with it that's different. I don't know in what other way I could ring that bell in that I rang it very hard and very urgently for many years and at my age now I see my peers, not exactly by name but people loosely around my age, going out and playing thirty-year-old music or trying to maintain some kind of foothold.

And it looks a little desperate, a little balding, and a little rotund and I'm neither balding nor rotund. So I just don't want to go, "Hey here's 'Low Self Opinion' again. Come on kids!" It feels like being in year five at the university, like shouldn't you be doing something else?

The last Rollins Band studio album--with Rollins accompanied by L.A. band Mother Superior--was Nice [Sanctuary-2001]. In 2006, the 1994-1997 Rollins-Chris Haskett-Melvin Gibbs-Sim Cain lineup reunited and played some shows opening for X and performed on TV for the season one finale of The Henry Rollins Show but nothing more came of the reunion.

At the height of prog rock's popularity hit singles weren't really frowned upon but they were certainly not a goal actively pursued by bands of the genre. After all, it was nearly impossible to get epic 10 and 20 minute songs on pop radio, no matter how catchy. Regardless, Genesis managed to have a Top 40 hit in the UK with this ode to complacency from the album Selling England by the Pound [Atlantic-1973].

Genesis went on to have many chart hits, but this was their first and last with original vocalist Peter Gabriel, who left the band to embark on a solo career after the following album, the epic landmark known as The Lamb Lies Down on Broadway [Atlantic-1974].

The Death of Tim

Happy Birthday to Steve Dildarian (42), creator, writer and director, as well as the voice of the protagonist of the now-canceled show The Life and Times of Tim (HBO). Yes, its crude animation makes South Park look like a Michael Bay extravaganza, but the show some have called an animated Curb Your Enthusiasm was nothing less than a half-hour of pure comedy gold.
Want proof? The first season episode “Latino Tim” / “The Priest is Drunk”--each half-hour was a two-fer--is especially hilarious.


Latino Tim/The Priest Is Drunk from Bob Morrow on Vimeo.

It's always interesting to see how artists who had a notable measure of success in the past are barely remembered (Humble Pie, and Nazareth are two examples that come to mind) while others linger on in the collective memory regardless of how much popularity and/or critical acclaim they may have had in their initial run. 10,000 Maniacs are in the former category. Such are the vagaries of popular music.

25 years after the release of the upstate New York band's creative and commercial high point, 1987's In My Tribe [Elektra], it seems as if current music fans are largely unaware of the Maniacs, while those who are of age to remember them and may have even been fans of the band, might not be aware of the band's continued existence. (Although truth be told, they haven't released a studio album in this century.) And former lead singer Natalie Merchant, who had a prominent solo career in the mid-'90s, hasn't had much visibility of late, despite continuing to make music and releasing albums as recent as 2010.

Perhaps this might be related to the fact that at its core 10,000 Maniacs' music is dated but in a way that isn't obvious like the big, cannon-like drum sounds and cheesy synths of certain '80s acts, but in that bland, "college rock" soundscape that recalls the less fun parts of the late '80s thru the mid'90s. As the All Music Guide's Chris Woodstra snarkily remarked in his review of In My Tribe, the album once "served as one of the soundtracks for P.C. living and was required listening on college campuses in the late '80s." Ouch.